Last week was the first anniversary of a major event in my life. Just last year, I was united with my five unknown half-siblings from my mother’s previous marriage. This was a good-luck story fitting for the evening news. I woke up one morning to find an e-mail in my inbox from a complete stranger. The gist of the email was the question: are we related? The answer was a hesitant YES.

To understand the magnitude of this WOW moment, you need to understand some history.  I was raised by my paternal grandparents after my mother’s death, who died before my second birthday. My father was around until I was 13, but for whatever reason, he never spoke of her. My mother and her life was a complete mystery to me. I picked up on a few hints  here and there; tidbits I carried inside me until later in life when I began a serious search for her ancestry.

I discovered one important hint when I was about 16 years old, the day my grandmother told me my mother had been married before. I vividly remember sitting on our large front porch in California. I don’t remember what led to the conversation, only the bombshell that my mother had other children.

“She would bring the little girl with her”, my grandmother told me.

I couldn’t believe what I had heard. I had a sister! She provided no details and as I grew older and the conversation faded, I wondered if  my grandmother’s words had been a false memory. Mom’s obituary did not mention other children, which seemed odd to me.  I almost convinced myself that this was nothing more than a fantasy derived by a lonely, only-child.

Ten years ago, however,  I discovered evidence that confirmed the truth. My mother had been previously married, she had five children, and what’s more, I knew one of their names. I found the information on Ancestry.com, in a World Tree project with a cryptic name I did not understand. Not only did it mention Mom’s marriage to a man named “Jim”, but it also listed her marriage to my father. I eagerly contacted the owner of the tree who agreed forward my email to the submitter. And so I waited.

After a few weeks of no news, I sent a second email and was  I told that if I had not received a response, he could not help me. I felt I was at a dead end. I didn’t whether my sister did not get the email, or if she simply didn’t want to respond. I feared the latter. Why, I thought to myself, would she want to know the child of the man who stole her mother away? As a mother myself, I could not comprehend any reason I would ever leave my children. Yet my mother did, including an infant. If I had been in my sister’s place, I don’t think I would want to know me either.

The family tree gave me just enough information that I was able to piece together my lost family. I knew each of their names, and where they lived. I thought of contacting one of the other children, but I was scared. If I had been rejected once, why would I think the others would accept me?

So when I read that email a year ago, my hesitation was founded on fear. Fear of rejection, but also fear of how my life would be different. I was an only child. What did I know about being a sister? What if I didn’t like them, or they didn’t like me. Lots of what-ifs. I could have refused to answer, or I could have said no, sorry, it must be some mistake. Instead I took a chance and said yes.

That day, a tornadic funnel of emotion sucked us all up. My siblings embraced me as if we had spent a lifetime together. Thoughout the day I learned the story of their lives after my mother left. Their father, I was told, was abusive. The fights between my mother and their father were terrible. After one horrible fight, she left to run an errand and never returned home. A divorce was filed but my mother did not get custody of the children. My brothers and sisters never knew their mother had another child. I don’t think they really knew when she died. Theirs was a sad life, one I never would have imagined.

As fate would have it, three of my sisters lived only a few hours away, so we quickly arranged a reunion. It was a wonderful day, full of stories, laughter, and love. The sibling honeymoon did not last long, however. In a few short months, our daily communion dwindled. Today, we are, at best, social media friends. The anniversary of  the day that changed my life passed by as if it were nothing special. Even Facebook forgot to remind me of the memories we shared a year ago.

The story fills me with regrets of what might have been. But in reality, there is nothing other than DNA to bind us together. We have lived almost an entire lifetime in separate worlds. Our experiences have made us as different as night and day to believe that we would suddenly become best friends is the stuff of fairy tales. While the blood that runs through our veins makes us related, it doesn’t make us ‘family’. Only time will tell if we ever truly become one.

It’s been over a year since my last post. In all honesty, I didn’t think I would return. I’m not sure why I stopped blogging, except maybe due to a lack of ideas and an unrealistic expectation that I needed to create something of value. I’m sure part of the reason was life “getting in the way.” Too much to do at work, too little time doing things I enjoyed. I had to pick-and-choose what activities I would spend my limited free time on. Blogging seemed like such a chore. I couldn’t compete with the big boys and girls. I’m too much of a perfectionist and I set myself up to fail.

What is different, you may ask.  I started The Artist Way (re-started is more apt) by Julia Cameron and have been working through the tasks. Things have started to change, slowly and every so delicately. I enrolled in a journaling course that started today. I guess I just feel like writing. Not for anyone else. Just for me.

I’m not sure what I hope to gain. Or maybe I should just say, I hope to gain. I hope to free myself of fear, eradicate my negative thoughts, let go of the things I cannot change. In a nutshell, I hope to sort myself out.  And some of that is going to end up on this page. Fair warning.

I am reminded of Robert Frost’s poem The Road Not Taken, a sad reflection on missed opportunity:

And both that morning equally lay
In leaves no step had trodden black.
Oh, I kept the first for another day!
Yet knowing how way leads on to way
I doubted if I should ever come back

But here I am.

Just west of the small Texas town of Gustine lies the old Union Cemetery. My husband and I visited the cemetery last week, a side-excursion on our way home to Oklahoma from South Texas. The cemetery is the final resting place for many of the Comanche County Kee’s, my paternal grandmother’s family. As a genealogist, visiting the family burial grounds is a must anytime we are within a “short” driving distance. I tease my husband that we have to visit the ‘dead relatives’. Fortunately, he is very understanding. 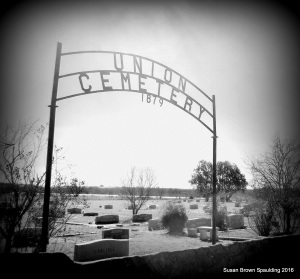 The small cemetery is enclosed by a stone fence with a couple of iron gates at either end. You cannot drive through the cemetery, but there is parking off the road and the gates were not locked. The Union Cemetery sign states it was established in 1879, several years after the town was originally settled, but before a post office was established. In the older part of the cemetery, there is a sign marking burial site of Susan Mary Rogers Speed, the first burial. The cemetery itself is well maintained and most of the markers are in good shape.

Having never been to the cemetery before, I didn’t know where to start, so I picked one end and began looking for anything that said Kee.  Having just come from South Texas, where the weather was warm, I was not prepared for the fierce wind of an early February morning. My light sweater did very little to keep out the cold.

Fortunately, I quickly found my 2nd-great grandmother, Plaiscetta Adeline Culp Kee. In keeping with Texan tradition, her grave marker only lists her initials, “P.A. Kee, wife of J.S. Kee.”  Plaiscetta was born April 23, 1822 in Chester County, South Carolina. She was the great-granddaughter of German immigrants who settled first in Pennsylvania and then South Carolina. Culp was an Americanization of the original name, Kolb. Plaiscetta  married John Silas (“J.S”) Kee , also from Chester County, around 1840. Plaiscetta, John, and their children moved to Alabama about 1848 where she and John had several more children before John died in 1867. She moved to Texas in the 1870’s, following in the footsteps of some of her sons.

The other important grave I found was my great-grandmother, Elmira Renfro Ford Kee. “Mira” was born in 1859 in Union Parish, Louisiana. She was married twice; first to William Issac Ford and then to John Culp Kee, son of Plaiscetta and John Silas.  Like many of the Kee women, Mira lived a long life, dying at age 90. I can remember a story my grandmother told me once about her. Mira was very young during the civil war but apparently old enough to throw rocks at Union soldiers as they passed by. Her strong feisty nature was definitely passed on to a few of her daughters.

Had I been more prepared with warmer clothes I would have stayed longer but it was a cold day and we had a long drive ahead. Missed during this visit were Mira’s husband, my great-grandfather John Culp Kee, also known as “Kit” and Lilla Renfro Kee, Mira’s sister and wife to her step-son John Jefferson Kee. This just means I need to make another trip, which is just fine with me.

**Union Cemetery is located 1.5 miles north of Gustine, Texas on Highway 36 at the intersection of County Road 1476 in Comanche County. ***

Writing as a Sanctuary